The Ernemann Anastigmat Ernostar is one of the most famous lenses in the history of photography.

If you are not jealous of me owning this lens you should be. It is a slice of pure history. The DDR on the front stands for Deutsches Reich Patent. This clever lens deign made way before computer technology made all modern photography possible.

I always wanted to get my hands on one of these. The Ernemann Anastigmat Ernostar 10cm f2. The optical designer Ludwig Bertele made many groundbreaking designs including this super fast lens that was released in 1923 for the Ermanox cameras. An f2 100mm....100 years ago!

Heinrich Ernemann in 1850 owned a shop for linen goods, trimmings and stockings in Dresden. In 1889 he and his Partner Mr. Matthias founded Dresdner Photographische Apparate-Fabrik Ernemann & Matthias.

Around 1890 the company started to run steam engines. 1891 Matthias left the company. Ernemann was self-educated about photography and talented for getting into that business. The first products of his company were wooden cameras for professional photographers. Until 1896 the company's own production of camera parts covered mainly the wooden parts, other parts had to be bought from suppliers. Then Ernemann added four new departments for camera parts production. The booming camera industry in Dresden led to a period of overproduction. Heinrich Ernemann knew how to get through the crisis: he transformed his factory to a stock market company, the Heinrich Ernemann, Aktiengesellschaft für Cameraproduktion in Dresden, founded in 1899. It produced cameras and movie projectors in Dresden and Görlitz. It took over the camera maker Ernst, Herbst & Firl and continued its Globus camera series. From 1901 to 1907 it was exclusive maker of Stöckig's Union cameras. Later it used that brand itself.

In 1907 Ernemann introduced its first SLR camera. In 1908 it started making its own lenses. Until then it had purchased lenses from Carl Zeiss and Goerz. Before the first world war, Ernemann employed Johan Steenbergen, who later founded Ihagee, also in Dresden. During the war Ernemann partially switched to production of warfare goods like its machine-gun camera and found many new customers for its "civil" vest pocket cameras among the soldiers.

Roughly the size of a large stack of playing cards, the Ernemann Heag XV is a pocket-sized folding camera introduced in 1911 by Ernemann.

In 1923 the camera division moved to its new factory building in Dresden-Striesen. The building's central high-riser was not the first in Germany, but since its construction plans had been made much earlier, it is the first one ever planned successfully in Germany. It is still known today as the Ernemann tower. This tower later became the symbol of VEB Pentacon.

At Ernemann the most inventive lens designer probably of all time, Ludwig Bertele developed this very famous "Ernostar 1:2" asymmetric lens with its six elements. For this powerful lens the company introduced the Er-Nox camera for 6×4.5 exposures in 1924. In 1925 a 6×9 format version followed, and the cameras were renamed to Ermanox. The Ernostar lens could be improved. Then it was an unusually fast and huge f:1.8 85mm lens, allowing photography in dimly-lit theaters and the like, using only available light. Finally a reflex version of the Ermanox was released in 1926. Other famous cameras from Ernemann include the Bob folding series and the Heag line of cameras as well as several sophisticated folding cameras.

The post-WWI times of the great German inflation until 1923 were good for Ernemann since inflation allowed low export prices for its products. In 1924 the company had to rationalize production. In 1926 Ernemann merged with ICA, also in Dresden, Goerz in Berlin and Contessa-Nettel in Stuttgart to become Zeiss Ikon. Until then Ernemann had got 213 patents. So this lens reviewed here is pre 1926.

Bertele designed the Ernostar and went on to design the Sonar. He took the triplet design and added an aplanatic lens in between the first and second lenses in order to decrease the spherical aberration. The result was an extremely fast lens for its time, an F2 lens with well-corrected spherical aberration and chromatic aberration.

This innovative lens design stands the test of time, as the Ernostar is a great starting point for longer focal length lenses.

The Sonnar was Bertele’s next lens innovative lens design, while in Zeiss, he packed the air gap between the second and third lens of the Ernostar to avoid Fresnel loss (no anti-reflective coatings at the time). He made the last element a doublet, much like Paul Rudolph's Tessar. This doublet helped correct the oblique aberrations such as field curvature and, thus, higher fields of view. A higher field of view means a shorter focal length, so the previous long focal length Ernostar was able to be a normal lens. But it all started with the Ernostar.

Ludwig Bertele created this the world's fastest still photography lens by far with a maximum aperture of f2 for Ernemann, and it was then used to great effect by a photographer called Dr. Erich Solomon.

Erich Salomon was the son of the wealthy Jewish banker. Salomon served on the Western Front. In the autumn 1914 he was taken prisoner by the French. As part of a prisoner exchange, he was released to Switzerland in 1918, where he lived with his family until 1920.

The picture on the left shows the Photo reporter Dr. Erich Salomon of Gustav Stresemann using the Ermanox Ernostar lens in the late 1920's and so creating a whole new press photo style that is still used today.

After his return to Berlin, Erich Salomon worked as a stockbroker. When the family's wealth shrank due to inflation , he founded a taxi company in 1924/1925. Two cars and a motorcycle with a sidecar, which he drove himself, were part of the fleet. In order to receive a higher salary, Salomon began taking photographs for Ullstein Verlag in 1925. This was his first active acquaintance with photography at the age of 39. Thanks to this lens in 1928 the Berliner Illustrirten Zeitung published a photo report he had secretly made during criminal proceedings for murder, which caused a sensation. Salomon soon broke his permanent professional relationship with Ullstein to work as an independent photo reporter.

Dr. Solomon went on to capture some of the world's most engaging and unforgettable photos, often without the subject knowing that he was photographing them. It was not until this lens in the 1920's that picture-taking without a tripod, in available light, at night and unnoticed by the subject was possible. Before this all photos had to be posed and lit by powerful lighting.

French Secretary of state Aristide Briand once said: "What kind of international conference is this when Salomon isn't present..?"

Marlene Dietrich phones her daughter in Berlin taken by Erich Salomon in 1930 with this lens.

With this fast, extremely light-sensitive camera and lens, he turned the numerous conference rooms of international politics into ‘unsafe territory’ from 11 November 1925 to 1 September 1939 the Reichstag in Berlin, the League of Nations in Geneva, the conferences on German reparations in the Hague. 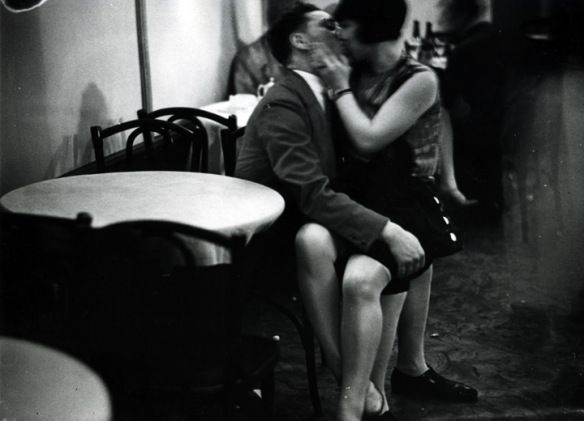 Erich Salomon was a creative genius who may have changed photography for ever but was murdered in Auschwitz 1944.

In my opinion, Bertele who designed this lens is also nothing short of a genius. Without his design Dr Solomon could not have change photographic history. He made this very bright F-number lenses in a time where anti-reflective coatings did not exist, and in a time when glass choices were still primitive. He continued to design spectacular lenses like the Sonnar F1.5 and the Biogon, both which I think are not only lenses that perform beautifully, but also look beautiful. His lens designs were the leading technology of the time and remain a quantum leap in photographic history.

So this is a review of the legendary "Ernostar 2/100" Lens, 1924 Ernemann, Dresden, no. 150452. The classic lens, early item with open helical. Let's think about this lens design conceptually. If we add a positive lens to the front side, the two positive lenses increase in overall optical power about the stop, so that means that the distortion becomes more difficult to correct. The last positive lens is moved farther away from the stop, in an attempt to correct the distortion.

The second lens is changed to an Aplanatic shape to minimise the aberration.

By looking at the lens, knowing what each lens does, we can clearly see Bertele's intentions, it's like we're reading his mind!

This is the original drawing by Ludwig Bertele, optics designer at Ernemann-Werke AG, Dresden, in his invention of the Ernostar photographic objective

Another thing we notice is that the symmetry about the stop is not that high compared to a triplet, so the field of view is narrower. However, a lot of the aberrations were corrected and it was possible to make a lens with an F-number of F2 and F1.8, which at the time (remember, this is the 1920's) made for a lens with an extremely large aperture.

The Ernostar made large apertures possible and allowed for the birth of reparative photography pioneered by Erich Salomon, but the large asymmetry about the stop caused coma aberration. Therefore, the field of view for a normal lens, about 50mm focal length for 35mm format, was not possible, whilst this was perfect for portrait photography it had limitations for landscape photography. Also, without an anti-reflective coating technology at the time, the more glass-to-air surfaces there were, there was more flare, and the transmission and contrast of the image decreased. Most of the shortcomings of the Ernostar lens, however, were satisfied later by Bertele with his Sonnar design.

In every sense, the Ernostar was a lens ahead of its time. Even today, a lot of medium telephoto lenses share characteristics with the Ernostar.

I just mentioned the Sonnar design ale by Bertele so how did he come to design that for Zeiss? Ernemann was merged 1926 into ZEISS-IKON and Bertele found himself a lens designer in Jena. Already in 1924 he succeed in scaling down the Ernostar f/2 integrating a cemented group consisting of three elements (triplet). At Zeiss he managed to connect the third and fourth element, and therefore reduced the total of optical groups to three and effetively reduced objectionable reflections and stray light. Within a year he afford to enhance the aperture of that lens about virtually one f/stop to f/1.5 by means of replacing the last element with a cemented group of two.

Well I have over 200 vintage lenses, fortunately most collected before the mirrorless revolution, many listed here and many of them are now very collectable. Before now I would have said my favourites were the Canon Dream Lens for its Bokeh, Carl Zeiss f0.7 for its light flare and a pre war Contax Carl Zeiss 50 1,5 which I normally keep on my camera for normal stuff.

But when this piece of history appeared as a buy it now on eBay already converted to 42mm and for well under half the price of a modern lens I just had to buy it quickly before anyone else did. As stated above Bertele for me as a lens collector was just a genius and if anyone here has not read up about him above, about Heinrich Ernemann and what Dr. Erich Solomon did with this lens to change photography forever, you should do so now.

When you even start to like to sniff your fingers to smell the 100 year old grease you get on them because of the external helicoid you know you must be hooked! And you will get grease on them as the adjustment for the aperture is at the end of the extended helicoid. Even stopped down the Bokeh is just amazing, I could control the depth and pop at ease.