The Lens details of a series of images taken by Steve Cushing on mirrorless camera.

The (Konica)-Konishiroku company is one of the oldest Japanese camera companies and was founded in 1873, during the first decade of Japan's industrial revolution, by Rokusaburo Sugiura, who suggested that his employer, the Konishiya apothecary in Kojimachi, Tokyo, begin to sell the new cameras and photographic materials that were being imported from Europe. The name Konica is taken from Koni(shiroku)-ca(mera). The apothecary owners consented and gave Sugiura permission to use the Konishiya name. This was seven years before Kodak was founded. In 1876 Sugiura changed his name to Rokuemon Sugiura VI to continue the succession of his father's name, moved the business to Nihonbashi, Tokyo, and renamed it Konishi Honten. In about 1880, Rokuosha, a subsidiary company, became a subcontractor for Konishi, producing cameras for commercial applications. By 1882 Konishi had established three factories for manufacturing lithographic materials and equipment, and matte paper for picture mounting and had begun to produce box cameras. By 1890, Konishi expanded camera production from an on-order basis to planned production, and four years later, was producing a variety of studio, field, and folding cameras.

In 1902 a Rokuosha factory was established to manufacture photographic paper and dry plates in what is now Shinjuku, Tokyo. A year later, the company began to market the box-shaped Cherry hand camera, the country's first name-brand camera. During the next five years, the Sakura brand name was to be found on many new Konishi cameras, including the Sakura Honor Portable, a box camera, and the Reflex Prano, the first Japanese large format single lens reflex (SLR) camera. In 1909 Konishi introduced three new camera models: Pearl, Lily, and Idea, all known for their quality construction.

World War I, which began in 1914, stimulated the Japanese economy and forced many industries to become less dependent on foreign goods. At the close of the war in 1919, Japan's total industrial production had almost quadrupled that of the 1914 level, and in the same period, the size of the industrial workforce had more than doubled.

A 1916 Konishi catalog reported that the company was exporting the Lily Number 2 camera to Great Britain. This was considered a matter of considerable pride because Great Britain was regarded as the birthplace of photography. During the next ten years, the company developed a variety of new camera models, photographic papers, and processes.

Konishi Honten was renamed Konishiroku in 1921 and reorganised as a limited partnership. On September 1, 1923, the company's headquarters was completely destroyed in the Great Kanto Earthquake. The structure was rebuilt very quickly, and Konishiroku was back in business by the next month. In 1925 Konishiroku received orders for gun cameras from the Japanese Imperial Navy Command. Rokuosha developed the first domestically produced photographic lens for the navy's gun cameras that year. Known as the Hexar. The name Hexar was taken from the lineage of Rokuemon Sugiura: roku means six, or hexa--it was a copy of a lens produced by Thornton, a British company. Although Japanese cameras had included imported photographic lenses up to this time, the Japanese Navy was determined to achieve self-sufficiency in defence matters and had urged the production of such a lens.

In 1936 the company was registered as a publicly owned corporation with the name Konishiroku Honten Company. In 1938, as the likelihood of war increased, the Japanese government placed restrictions on cameras produced for consumers, and Konishiroku directed its major efforts to military products. It developed two types of ultra-compact aerial cameras for the Japanese Army in 1939 and 1940. In 1940, five years after Kodak introduced its Kodachrome color film, Konishiroku unveiled its Sakura natural colour, Japan's first colour film.

In 1945 the company's Yodobashi factory, warehouse, and research center were damaged by U.S. air raids. At the end of the war, in September, all factories that had been taken over for military production reverted back to the manufacture of consumer goods. Despite a severe shortage of parts, Konishiroku resumed production of several cameras. The company's first 35-millimetre camera was introduced in 1947. Lenses made by Konica gained wide recognition for their solid construction and, above all, for their optical quality almost as soon as Konica cameras appeared on the American market at the end of the 1940s. The lenses mounted on Konica’s first post-WWII rangefinders, its TLRs and its later medium format cameras, the interchangeable lenses for its two SLR lines (the “F” and the “AR” series) and those for the celebrated Hexar RF rangefinder of 1999 all sustained Konica's enviable reputation as one of Japan’s finest makers of optical equipment.

In 1947 Konishiroku was listed as one of Japan's five leading photographic-lens makers and one of three camera-shutter producers. Konishiroku produced approximately half of all Japanese cameras. For Konishiroku, the 1950s were a time of growth and continued product refinement. In an effort to increase its U.S. exports, the company established Koniphoto Corporation in Philadelphia, Pennsylvania, in 1956, to market its cameras and photographic materials. That same year, the company won the Deming Prize for Industrial Efficiency for the excellence of its quality-control activities in upgrading productivity.

Photographers, critics and testing labs were astounded by the performance of Hexanon lenses. It was such that, for many years, the company's main sales slogan in America – created by Nat Kameny of the Kameny & Associates advertising agency – was The Lens Alone is Worth the Price. And this was no empty boast: In the middle 1950s, the Konica Camera Company – Konica’s agent for North and South America, established by Henry and Marian Froehlich in 1951 – asked the US Department of Commerce’s National Bureau of Standards to test a batch of Hexanon lenses. Their resolution was found to be such that many German lens manufacturers asked the Konica Camera Company not to publicise the figures as they were being “swamped with requests for lens resolution numbers which had never before been questioned.”

In 1962 the company moved Koniphoto from Philadelphia to New York City and opened the Konica European Center in Hamburg as a marketing outpost. The following year, it closed its Yodobashi factory and built a large, state-of-the-art factory in Hachioji, a Tokyo suburb. T
Konishiroku celebrated its 100th anniversary in 1973 and began to use the Konica name on products it sold in the European and North American markets. This lens pre-dates this change. Dating these lenses is very difficult. The serial numbers prove to be a challenge. Here too, a rumour doing the rounds in the Konica community is that they picked its serial numbers at random. Some even claim that Konica had a deliberate policy of mixing up serial numbers, the argument being that Konica supposedly did this to keep the competition in the dark about its production volumes. Just how desirable it is to hide production volumes per se, whether it is at all practical, or how effective it is to go about it in this fashion. I have never heard of any company going to such lengths to prevent the outside world from knowing what it was up to (unless it was active in a highly-sensitive branch of industry). 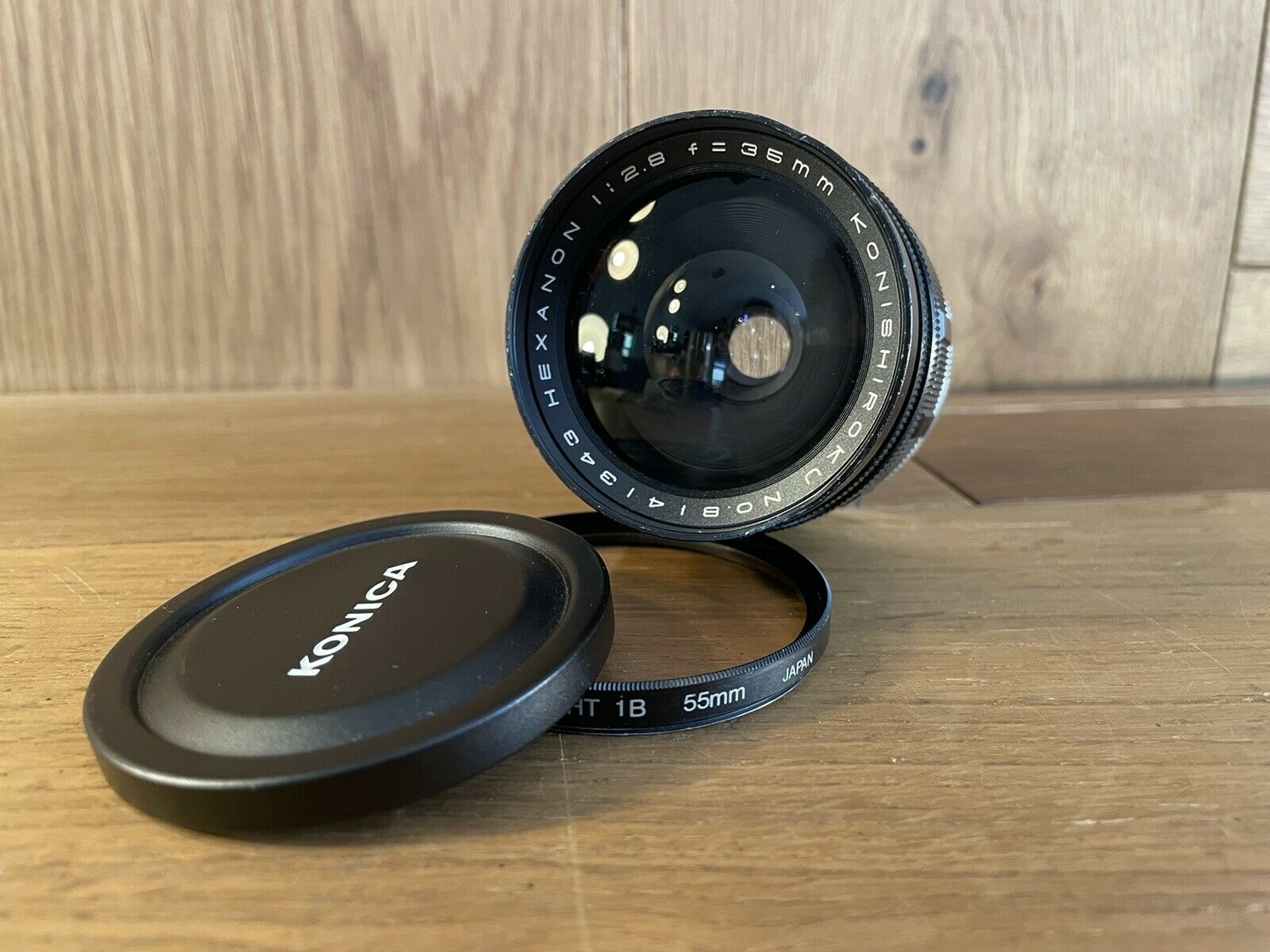 This lens is a early lens so its mount is Konica’s initial bayonet mount – developed in the late 1950s and called the ‘F-mount’ . It was changed on later versions as it was ill-suited for an automated system because its diameter (Ø = 40,5mm) is far too narrow to accommodate the necessary couplings. In order to enable fully-automatic exposure with full aperture metering, Konica needed an entirely new lens mount and was the first SLR maker to build one with AE operation in mind. The new mount – the ‘AR mount’ (Ø = 47mm) – was the element around which a whole new SLR system was conceived.
The 35mm is an excellent choice as a general purpose lens and some photographers prefer its perspective to that of the usual 50mm standard lenses. This 35/2.8 was the first made for Konica’s F-mount cameras in the first half of the sixties. It remained basically unchanged for about two decades, when it was replaced by the compact version.

This is the rarer preset version of this lens with the same optical formula and with its later brother becomes one of the most common Hexanon lenses. An excellent quality lens. A compact version of this lens, with an aperture of f22 and better coatings, was introduced in 1981. That version is quite rare and more expensive.